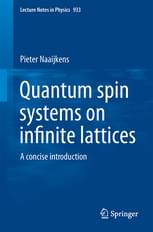 My new book, Quantum Spin Systems on Infinite Lattices: A concise introduction, has been published in Springer’s Lecture Notes in Physics series. The book is an expanded version of lecture notes I wrote for a course I taught in the Sommersemester 2013 at Leibniz University Hannover.

The lecture notes are meant as an introduction to the operator algebraic description of quantum spin systems with infinitely many sites. The intended audience are advanced undergraduate students in mathematics or physics, or beginning graduate students. Although most of the important mathematical constructs are recalled briefly in the notes, some mathematical maturity is assumed (e.g., a good understanding of convergence in metric spaces). Moreover, emphasis is placed on developing intuition for what is true, outlining the main ideas (both from physics and mathematics) behind a proof. For the sake of clarity of the exposition, some results are not stated in complete generality, but rather an easier special case is proven.

The book is essentially divided into three parts: the first recalls some basic notions of functional analysis, including Hilbert spaces, bounded linear operators, completion of metric spaces, and an introduction to the theory of C∗-algebras. In the second part this is applied to describe quantum spin systems on infinite lattices, the main subject of the lecture notes. For example, it is explained how to define dynamics on such a system, and how to define ground and thermal states. The fundamental tool of Lieb-Robinson bounds is also discussed, and throughout the lecture notes it will become clear that locality plays an essential role.

Finally, in the last part, recent developments are outlined. Although the treatment here is less detailed, it serves as an introduction to current research topics. Included are applications of Lieb-Robinson bounds to a Haag-Ruelle type of scattering theory and to equivalences of gapped ground state phases, as well as a discussion of the theory of superselection sectors in Kitaev’s toric code.

The book is available directly from Springer or through various other retailers. A preprint (without the final layout and without corrections made in proof) can be found here.